Analyzing the Latest Wave of Repression in Nicaragua

There are a number of indicators from the 14th and 15th of October that point to a new stage in the struggle against the Ortega regime. 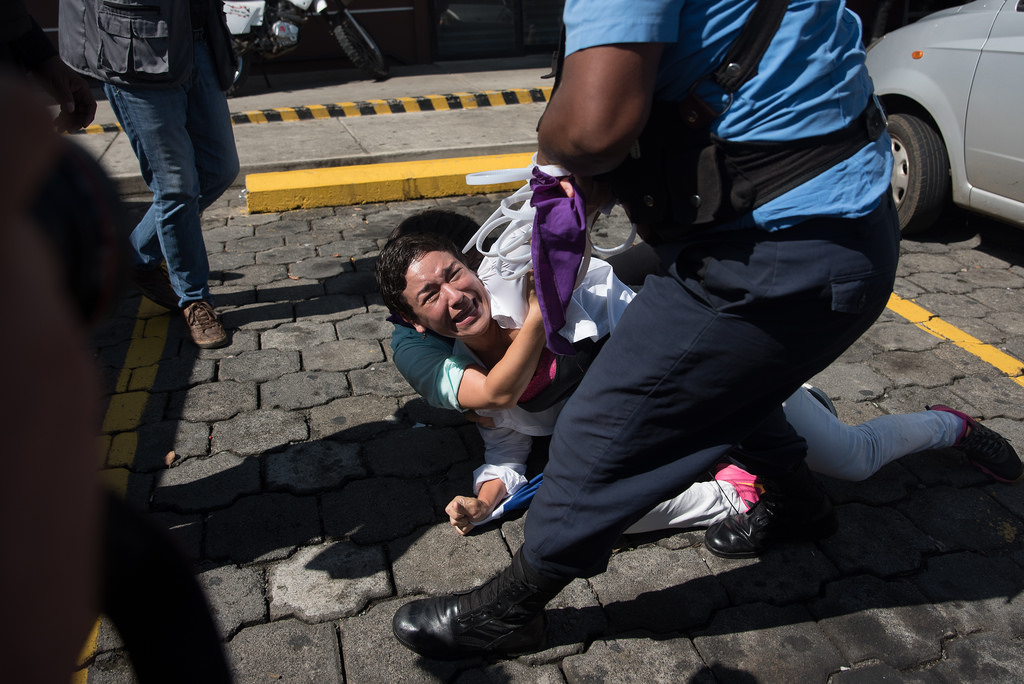 I use the following questions to guide us in my reflection:

In terms of the first question, we must remember that until a few weeks ago, Ortega’s assumption – expressed in all his speeches and his interviews with international media – was that the opposition in Nicaragua would be able to demonstrate peacefully.  We all know that the government’s goal was to stop the demonstrations, through intimidation and massive deployment of their shock troops, the paramilitaries and the anti-riot police, but always with the realization that one way or another the demonstrations would continue.

But this time Ortega upped the ante.  He banned all demonstrations, orchestrated a massive concentration of police where the march on Sunday was supposed to begin, and also ordered the arrests of dozens of protesters, with the clear purpose of blocking any kind of demonstration.

Why doesn’t Ortega want any more marches?  Is it a sign of weakness or strength?

Clearly, the brutal repression is a palpable sign of the regime’s weakening.  It is not a sign of strength.

The wave of repression underscores the failure of Ortega’s attempt to present himself as a victim and as someone who respects human rights and the law, in the many interviews he gave to the international press.  Ortega knows that people do not believe him.

The repression also reveals the government’s failure to project the image that the situation in Nicaragua has normalized.

As we saw last Sunday, statements from governments, political organizations and international organizations rained down on the government, criticizing the repression and demanding freedom for the detainees.  Even Mercosur made a statement.  These are all clear signals that the international community is closely following the situation in Nicaragua – and that they do not believe Ortega’s siren songs.

But the repressive onslaught means more.

Ortega had adopted as his strategy a tug of war of sorts with the opposition.  Thus on the one hand, he was trying to use intimidation to get people to back down from the blue and white mobilizations, hoping to create enough fear that people would just stay home.  At the same time, he was organizing marches, mobilizing state workers and the slice of the population that still supports him.  Ortega was trying to prove that he had the backing of most people and that only a minority was protesting.

The brutal repression of October 14th revealed the failure of this strategy.  In spite of the government media’s acrobatics, Ortega could not hide that this strategy was leading him to lose the game.

The repression is also a direct attack on the recently constituted organization, Blue and White National Unity, the Unidad.

The lack of consensus among the different organizations fighting for justice, freedom and democracy had been to Ortega’s advantage.  He knows that, even though it is just beginning, this unity represents a leap forward in the struggle.  And that’s why he tried to smash it.

From our point of view, those are the key causes for last Sunday’s repression.

Now we turn our attention to why some of those detained were released.  As we see it, this is also a sign of weakness.  However, we would be mistaken to take on a triumphalist position.  That mistake was made before and cannot be made again.  As our grandmothers would say, Ortega does not take a stitch without thread and, predictably, he is trying out a change in tactics.

We should not be surprised if he now attempts to present himself to the international community as a negotiator, with a spirit of flexibility.

What is the purpose of this shift?   More than anything, it is one last attempt to neutralize the Magnitsky Act as it applies to Nicaragua.  It is also possible that Ortega is trying to make arrangements under the table, opening hidden channels of negotiation, with the goal of awarding legitimacy to partners in this enterprise– at this point; we do not know precisely who they are.  It is not a coincidence that Vinicio Cerezo, General Secretary of SICA, the Central American Integration System, has begun to stick his head out and is receiving coverage from some media.  Liberating the prisoners was aimed at sowing doubts in the heart of the Unidad, as hundreds of political prisoners remain behind bars.

That is where things stand at the moment. Still pending is the question of what to do under the current circumstances. But that is for another discussion.  For now, I highlight the following:

“If you don’t pay, your family pays”: new repressive pattern of the regime

TODAY NICARAGUA (Confidencial) Between September 4 and 18, the regime of...
Read more